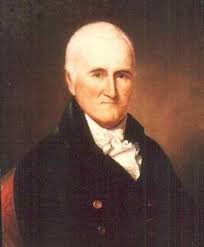 Thomas Leiper was born in Strathaven, Scotland in 1745, and emigrated to Maryland in 1763. His brother in Virginia introduced him to the tobacco industry upon his arrival, and two years later he opened a tobacco shop in Philadelphia and became the leading tobacco merchant by the time of the Revolution.

Leiper was one of the founders of the Philadelphia City troop, a light horse cavalry, and served with them as lieutenant during the Revolution at the battles of Princeton, Trenton, Brandywine, and Germantown.

Leiper bought his first piece of property in Delaware County in 1776, a mill at a waterfall in Crum Creek along Yale Avenue at the Swarthmore-Nether Providence border. He used the mill as a tobacco mill, and called the area “Strathaven” after his hometown in Scotland.

In 1778,Thomas Leiper married Elizabeth Gray whose father was Speaker of the House in the Pennsylvania State Legislature. Leiperwas 32 and Elizabeth 16 when they married. They had 13 children; 10 lived to adulthood.

Over the next 20 years, Leiper acquired a total of 728 acres following Crum Creek to the Delaware River. For a time a section from Fairview Road to Chester Pike, now Crum Lynne, was known as Leiperville. The property included a number of mills, but Leiper’s biggest money-making venture was a stone quarry which eventually extended from the north bank of Crum Creek up to and across what is now Route 320.

Granite from the Leiper quarry was sought after as a building material. Much of the Leiper granite became curbstones in Philadelphia and door steps for city row homes. It was also used for buildings on the Swarthmore College campus, homes in Swarthmore, and  Leiper Church.

When Thomas Jefferson became George Washington’s Secretary of State he commissioned Leiper to build a home for him in the city, and through this venture they became very close friends, and began a long period of correspondence that lasted until Leiper’s death. Leiper’s political legacy includes being one of the leaders in the formation of what became the Democratic Party in Pennsylvania. 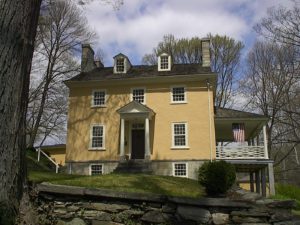 In 1785 Leiper built a country home in Delaware County for his family. He chose a site on the southwest bank of Crum Creek and built an impressive Federal-style mansion he called “Avondale”. His descendants lived in the house until 1959 and claimed that Thomas Jefferson and eight other Presidents were entertained at Avondale either before, during, or after their terms in office.

As demand for the granite from Leiper’s quarry grew, transportation of the material became an issue. In wet weather the wagons hauling the granite became bogged down on the dirt roads and since Crum Creek was not navigable, barge transportation was not an option.

In 1790 Leiper requested permission to build a canal to Ridley Creek but was denied by the General Assembly because of the objections of the other mill owners.

Almost twenty years later he had the idea of moving the stone by railroad. As an experiment, he had 21 yards of demonstration track laid in the coach yard of the Bulls Head Tavern in Philadelphia.

Encouraged by the success of his experiment, Leiper began to build his railroad. It consisted of a pair of iron rails laid on wooden ties. An ox, hitched to a cart filled with stone walked between the rails slowly pulling the cart from the quarry to the navigable tidewater of Ridley Creek. There it was loaded onto barges for the ten mile trip to Philadelphia. In 1809 Leiper’s vision became the first permanent railway in America.

The quarry was operated by the Leiper family until 1946, when it was sold and became a landfill. The Swiss Farms store and the medical building on Route 320 in Swarthmore stand today at the Leiper Quarry site.

Thomas Leiper died on July 6, 1825, and his  home on Market Street was torn down in the 19th century. The site was later occupied by Gimbels Department Store. Leiper is remembered as a Patriot, prominent businessman, innovator, and an influential resident of Nether Providence during our country’s infancy.