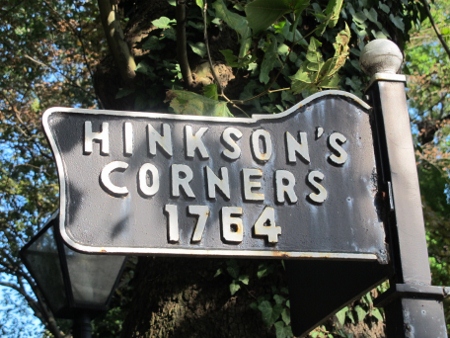 We all have driven through the intersection at Providence Road and Brookhaven Road innumerable times. You have probably seen the sign labeled as Hinkson’s Corners at the northeast corner of the intersection as you have sopped at the red light. Do you know any of the history of this corner?

The land where James Hinkson, a local wheelwright, lived was once part of the Vernon land grant. Three Vernon brothers, Thomas, Robert, and Randall received land grants from William Penn that encompassed 900 acres in present day Rose Valley and Nether Providence Township. The brothers came to the area in 1682 and began farming the land.

The Vernon family had split allegiances when the American Revolution commenced. It is thought that the land where Hinkson’s Corners stands was confiscated from a Vernon family member who sided with the British.

Hinkson built two shops on the property, one a log structure, and the other a wood frame shop. Hinkson used one of the shops for his business, and the other was occupied by blacksmith Richard Nuzrum, who lived on a farm in Upper Providence. The blacksmith shop, located at 3 Brookhaven Road, was used as the Township Commissioner’s meeting room from the late 1930’s until 1953.

The oldest section of the house standing on the corner is believed to have been built in 1737, and the original frame dwelling was replaced by a stone structure, that still stands, in 1799. The property was also used as a general store for over 60 years, and in the 1880’s became the location of a summer resort.