Starting February 14 Delaware County will begin the first of 4 waves of mailings of tentative property valuations to County residents. The purpose of this notice is to identify a tentative, new value that has been determined through the recent reassessment process for County properties effective tax year 2021. The assessment will represent should reflect 100% of the value of the property as of July 1, 2019.

Property owners will have just 10 days to sign up for informal hearings to address issues about that valuation. The 10 day window is based on the date of the notice, not the date the letter is received by the property owner.

If you still have questions or disagree with your tentative property value, you may opt to schedule an informal review of your property with a representative from Tyler Technologies, the company contracted to perform the countywide reassessment. To schedule a review call 888-773-7056 between 8:30 AM and 4:30 PM Monday through Friday or schedule online by visiting www.Tylertech.com/DelCo.

The story of America is one of moving.

A total of 13.6% of Americans today were born in another country, and most of us are descended from immigrants. This story of migration also includes moving within the country. Over the last 200 years, Americans have settled the frontier, moved away from cities toward suburbs and migrated away from cities in the Northeast toward the South and West.

This narrative that Americans are constantly moving within the country is no longer true.

Over the last 35 years, the number of Americans who have moved – within their county, state or out of state – has steadily declined to nearly half of their previous levels.

Why are Americans more rooted?

The decision to move is a complex one. People are often searching for better opportunities but must also take into account factors like family characteristics, lifestyle and community.

I have studied American migration for over 20 years, and I see no evidence linking the migration decline to changes in the way people make those decisions. Rather, I see three broad changes that have changed the outcome of those decisions.

First, real incomes have remained flat for over the last 35 years. Americans have been able to improve their standard of living only by both working more and borrowing more. That includes an increase in the number of women working, leading to the growth of dual-income households.

The increase in both family and personal debt both makes selling a house more difficult and reduces financial resources available for a move. Meanwhile, the growth of dual-income households restricts moves, because any long-distance move would require both partners to find a suitable job in a new destination.

Second, the baby boomer generation has squeezed younger generations out of housing and job opportunities.

Finally, Americans are less likely to move due to the widespread adoption of advanced information and communications technologies, such as the internet and smartphones.

My colleague and I investigated the role of these technologies in both the U.S. and Northern Ireland. In these studies, we compared people who accessed and used the internet at home, in various ways, to people who did not, and found that internet access was strongly associated with decreased mobility.

We conclude that internet use, and likely all forms of advanced information and communication technologies, allow people to remain in a place, yet access a growing array of remote employment and educational opportunities. Moving is just not as necessary as it once was.

What’s more, advanced information and communications technologies improves the quality of information available about possible places to move. We believe this makes decisions about whether and where to move more efficient and reduces the chances that people will move to a place that they don’t like.

Rootedness is the new normal

The currently low levels of geographic mobility are likely to be permanent.

This self-reinforcing process works in the other direction as well. Having never moved or having moved very little reduces the chances of moving or moving again; migration is viewed as risky, expensive and disruptive. Plus, the longer a person stays in a location, the more attached they grow to their home and job and community.

Since the current U.S. population is more rooted than ever, I think it is likely that the country will continue to have lower migration rates into the future. Young adults who have been raised during the period of declining migration rates of the last 35 years are now less likely to migrate as a consequence. They may then pass this legacy on to their own children.

The impacts of a more rooted society

I believe that the migration decline and associated increase in rootedness will have dramatic effects on American society.

Rootedness has many positive outcomes, such as greater attachment to place and more meaningful social and community connections. These connections to place may then serve to provide social and economic support during periods of economic uncertainty.

Second, I suspect that the decline in migration will present a challenge to large corporations and regional economic development agencies, for example, which rely upon migration to attract and retain talent.

Finally, the government’s approaches to resolving regional economic disparities will have to change. Federal and state governments traditionally have not intervened much in regional labor and housing markets, under the presumption that high levels of migration serve to reallocate people from areas with few opportunities and toward areas with many opportunities.

The decline in migration indicates to me that federal and state policy must shift more toward “place-based” policies, emphasizing training and education, along with developing industries tailored to local skills and resources, similar to what is more common in Europe.

This article is republished from The Conversation under a Creative Commons license. Read the original article. 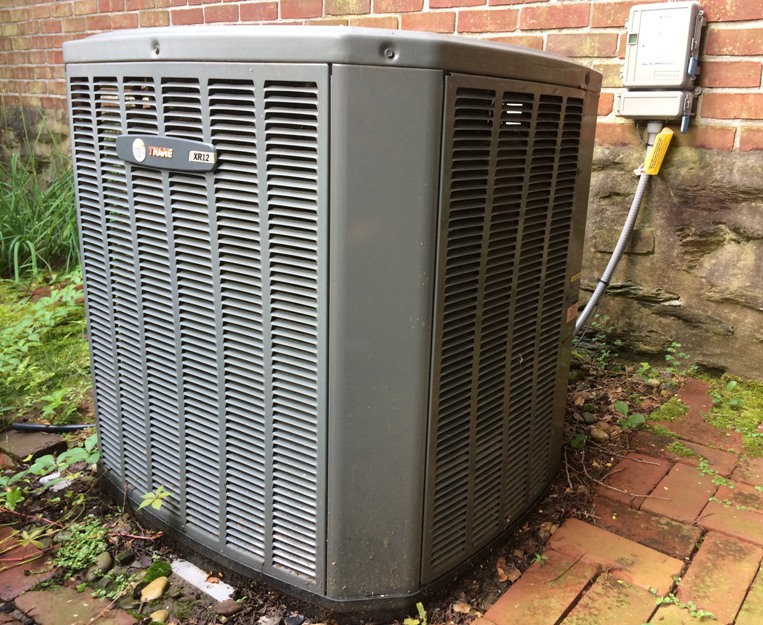 As the weekend approaches with the possibility of the thermometer reaching 100 degrees for the first time since 2012 a home with air conditioning is a necessity not a luxury. But do you know how your central air conditioning system can be expected to perform?

If you have your air conditioner set to a temperature that makes that temperature differential more than 20 degrees your system will likely run all day long and still not quite reach the desired temperature.  This becomes a waste of money on your end by overusing a system that was not designed to maintain such a temperature.

A good rule of thumb is during the hottest days when the dial reaches 100 degrees it is best to set your AC to somewhere between 75 and 80 degrees.  You can also supplement that slight temperature difference with closed curtains on sunny side of the building, running ceiling fans and keeping the air flow moving by using portable fans.

Also make certain that you perform the most basic air conditioning system maintenance – checking your air filter. It should be replaced every 90 days in order to keep you system running at peak efficiency. 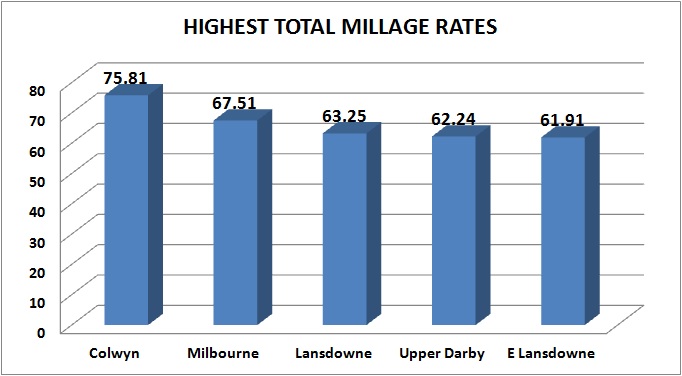 Quite some time has passed since I last posted the highest and lowest tax rates in Delaware County. With the county tax rate for the calendar year remaining unchanged at 56.04 mills these rates reflect the tax year 2017 – 2018 with new municipal and school tax rates to be announced sometime in the Spring.

The millage rate refers to the amount of tax that is paid per thousand dollars of the assessed value of a home. For example a home with an assessment of $100,000 would pay a total tax bill of $7,581 in Colwyn Boro on the high end of the scale, and a home in Thornbury Township assessed at the same value would pay a total tax bill of $2,081 on the opposite end of the spectrum.

Nether Providence has a total millage of 55.0 and Swarthmore’s total rate is 55.93.

If you are interested in the lowest tax base in Delaware County, take a look at Thornbury Township. Their total millage amounts to 20.81 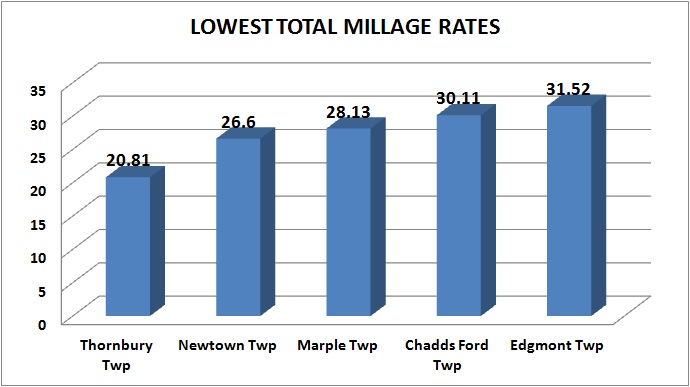 The total tax obligation is composed of three components:

– School Taxes – the largest component of the tax structure 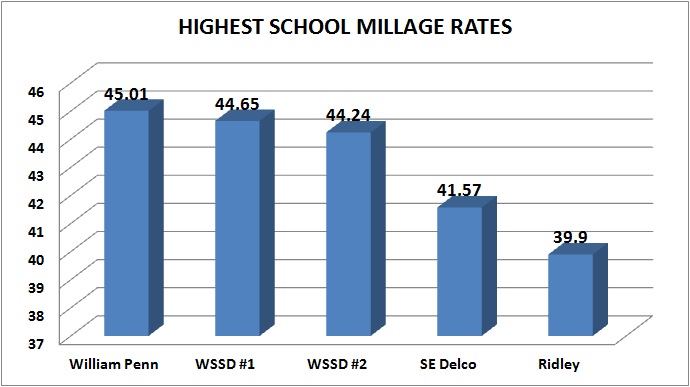 William Penn School District does hold the distinction of having the highest school taxes in the area. William Penn school tax millage is 296% higher than the West Chester District. 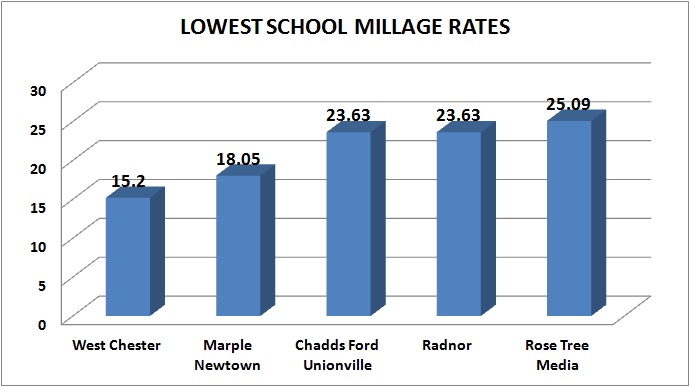 Thornbury Township residents, where students attend the West Chester schools, have the lowest school in Delaware County at 15.2 mills and also has the lowest total tax millage rate at 20.81 – they have no municipal tax levy.

Milbourne Boro has the distinction of having the highest municipal tax burden.

For the millions of Americans who use their homes as a personal bank in the form of home equity loans – also know as a HELOC (Home Equity Line Of Credit) – the new tax legislation signed into law last month has an unwelcome surprise.

Under the new law the interest paid on home equity loans will no longer be tax-deductible. However interest on a HELOC loan that is obtained to acquire, build or substantially improve the residence will remain deductible.

Historically, borrowers could deduct home equity interest on loans up to $100,000 ($50,000 for married people filing separately). And unlike the deduction for interest on primary mortgages, home equity deductions are disappearing for both new and existing borrowers. No loans will be grandfathered.

In the past, homeowners have used their home equity to get low, tax-deductible interest rates for a myriad of reasons such as a large purchase, debt consolidation, or financing a college education. Because HELOC loans are secured by real estate, rates on these loans are considerably lower than rates for an unsecured loan. A homeowner scores a lower interest rate and was able to to deduct the interest from their taxes. The new law closes this “loophole” for using home equity as a cheap source of consumer financing.