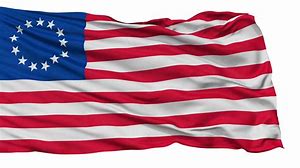 The Vernon family of Nether Providence were prominent during the Revolution. Nathaniel Vernon had two sons, Nathaniel Jr. and Frederick, and resided at  a home located at the end of present day Hickory Lane. At the outbreak of the war he was sheriff of Chester County and was an outspoken advocate of the cause of the crown, and subsequently became so offensive to the colonial authorities that he was declared a traitor, as was his son, Nathaniel Jr. The father fled to the protection of the British army, while Nathaniel, joined the Brithsh army serving with the Tory Light Horse. Frederick, sided with the Continentals, joined the army, and rose to the rank of Major.

During the British occupation of Philadelphia, Frederick obtained permission to visit his wife and family at his home in Nether Providence located at 204 West Brookhaven Road. His brother, Nathaniel learned of his visit and, and marched a platoon of  Tory Light Horse from Philadelphia to Nether Providence, intent on capturing Major Vernon. The troops surrounded the house. Nathaniel entered the home and was about to climb the stairs, when Frederick, who was aroused by the noise, halted him from the head of the stairs, where he stood armed with a pistol. Nathaniel made it known that he had come to take him prisoner and that he must surrender, since troops were surrounding the house.

Nathaniel tried to convince his brother of the inevitable British victory, and offered him a commission in the British army. He had come for his welfare he assured his brother. Frederick replied that he would never surrender, that the British could not take him, and that if his brother or any other person attempted to ascend the stairs he would shoot; only as a dead man could they capture him. Nathaniel finding his brother so determined, withdrew his troops, and Frederick remained true to the Patriot cause. At the conclusion of the war he was one of the founders of the Society of the Cincinnati, and died in Nether Providence at an advanced age. The fate of his loyalist brother Nathinel is unknown.

Ruins Of The Cleftrock Bottling Works On Avondale Road

The Cleftrock Spring Water Bottling Works provided bottled water from 1945 until the 1960’s. Located on Avondale Road in Wallingford near the Blue Route overpass, the company was owned and operated by Y.S. Walter Simmons and his brothers Samuel and Wentworth. The bottling works was shut down when the water source was contaminated by pollution

Cleftrock was one of two bottling works in Nether Providence. The other was Frank Young’s Crystal Rock Springs. It was located on Young’s farm which is located on the site of the present day Weston and Putnam Village townhouse communities. 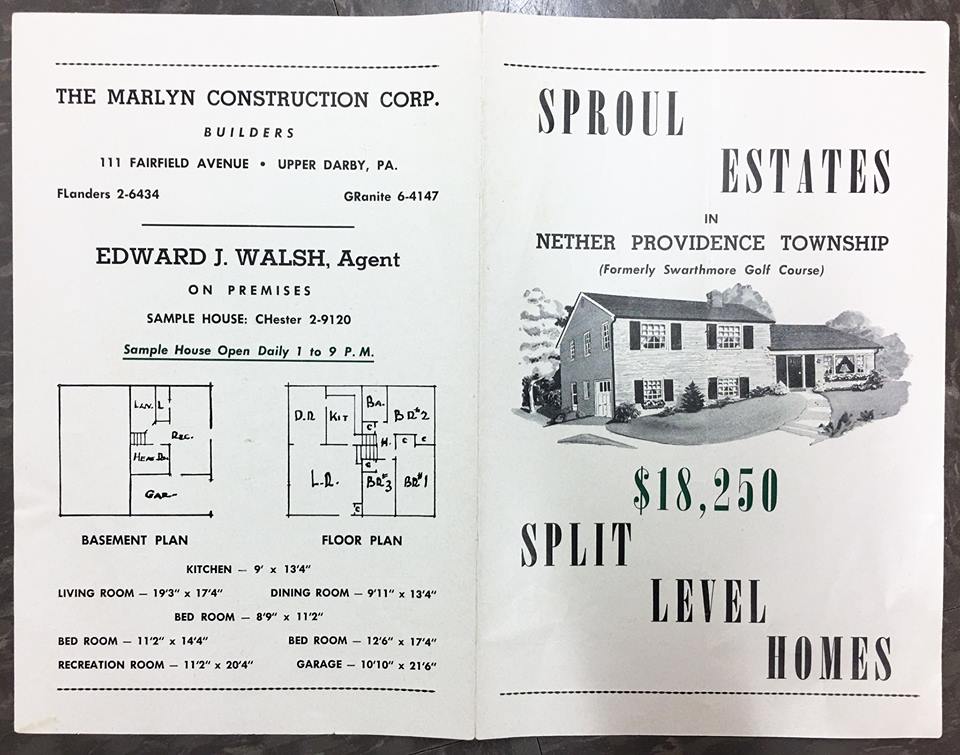 The original sales brochure for Sproul Estates advertising homes for $18,250. You could even visit a daily Open House at a sample house until 9 PM. 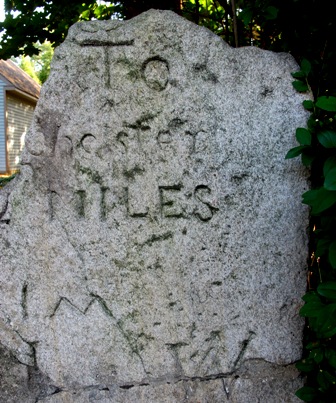 On October 17, 1683 the residents of Providence Township petitioned the Court Of Chester County which sat in the City of Chester to establish a road from Providence to Chester City. The request was approved and the road built was known as the Providence Great Road. Today the road is still in use and we know it as Route 252, or Providence Road.

Did you know that in 1701 the Court approved another Providence Road? This road ran from Philadelphia through Darby and Nether Providence Township and points west. Locally the name was changed to Plush Mill Road. In Secane and Aldan it is still known as Providence Road.

There are two stone mile markers on Providence Road still standing in Nether Providence Township which were put in place during a 1763-1764 road survey. One stands near the Furness Library and read “4 M To C” – 4 miles to Chester, and the other one pictured above is located on S Providence Road just south of the entrance to Mallard Mill Run and it reads:

The rain started in the morning of August 5, 1843 around 7:30 AM and increased in intensity all day. Area residents reported that by 3:00 PM winds had reach gale force and the rain continued at a furious pace. In the evening about 7:00 PM a wall of water, fueled by water levels that rose 5.5 inches in 40 minutes, came rushing down both the Crum and Ridley Creeks without warning. The water overflowed the banks of Crum Creek by more than 20 feet and Ridley Creek by 21 feet.

At daybreak, the sky indicated rain, and about seven o’clock a moderate fall set in, which, while it slackened, never entirely ceased until between the hours of two and six o’clock that afternoon, when the extraordinary opening of “the windows of heaven” took place which made such extended ruin and misery in a brief period of time. The rain, when falling most abundantly, came down in such showers that the fields in that part of the county removed several miles back from the river are said to have been flooded with water almost immediately, and where the road was lower than the surface of the ground on either side, the water poured into the highway in a constant stream of miniature cascades. The lightning played incessantly through the falling torrents, reflected from all sides in the watery mirrors in the fields producing a weird and spectral appearance, such that those who witnessed it could evermore recall.

As most of the area’s commerce was centered around waterways the storm wreaked havoc with the many mills located along the creeks, and it was reported that no mill or milldam escaped destruction or severe damage. As many as 52 county bridges were swept away by torrents of water. The water carried away homes, dams, bridges, factories, livestock and people – 5 of 7 members of the George Hargraves family including 4 children lost their lives on Ridley Creek near Sackville Mills, in total 19 Delaware County residents perished during the storm.

In the western part of the county in Concord Township total rainfall was measured at 16 inches. Estimates of damage totaled $250,000, which equates to approximately $73 million today.

Delaware County has been visited by monster storms with names like Irene, Agnes, Hugo and Gloria over the years. But none, it seems, was more destructive than the mother of all, the Great Flood of 1843.